The musical styles of Coffee Tone 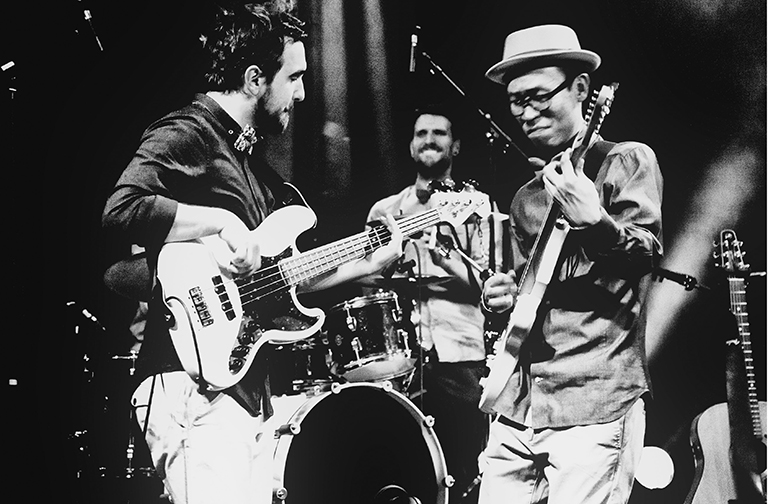 These three styles of music have in common that they were born around the 1960s, at about the same time. Strong of this beautiful age, these musics are more alive than ever, because they are still very present in the current musical landscape. For Coffee Tone, they are the music of Energy: who creates and who gives. We mix and transform the old and the modern to create something new. And it is with this persevering enthusiasm that we light up our musical notes.

The music Soul is borrowed of spirituality, the Pop has for characteristic to be accessible to all, the Funk as for him, incarnates this spirit of festival which draws its anchoring in the groove.

This notion of groove, dear to us, is the main thread of our music. It draws its essence from Afro-American music (negro-spiritual, gospel, blues, jazz, rhythm & blues, soul, funk, dance, disco) and it is it that provokes us this irresistible swaying of the hips that we want to share with you by wanting to invite you to dance, sing and celebrate life!

Soul, pop, funk, but what exactly is it?

Soul music, is defined as the music of the soul. This musical current born in the United States continues to evolve until today by crossing borders and spreading its influence internationally. When we talk about Soul, it represents for us artists like Marvin Gaye, Bill Withers, Stevie Wonder, Sam Cooke, Otis Redding, Aretha Franklin, Ray Charles, Donny Hathaway, Chaka Khan or Amy Winehouse. We have the utmost admiration for them and strive to pay tribute to them at each of our concerts.

Funk is Soul's accomplice younger sister. She follows her elder sister with that fiery temperament that characterizes her. Lively rhythms served by a groovy bass-drum duo, a sharp electric guitar that irresistibly invites the head to sway in tempo, funk, is the music of the party par excellence. Its great representatives are James Brown, Prince, Earth Wind and Fire, Kool and the gang, but also -M-, The Jackson Five, Chic, Jamiroquai, Bernard Wright. It is with great fervor that Coffee Tone plays this music of sharing.

And finally, Pop music is probably the most varied musical style. Coming from English popular music, it bears its name well since it is the one that touches the largest audience, all generations combined. The theme of love and male-female relationships is often discussed, and it is this music that propelled one of the first bands of the genre to the rank of interplanetary stars: The Beatles. How not to talk about Michael Jackson, Queen, Oasis, Bruno Mars, Beyoncé? But pop is also Daft Punk, The Weeknd, Adele, Sam Smith, Stromae, Maroon 5, Coldplay, Gorillaz, OutKast.

Coffee Tone is therefore all those aesthetics skillfully mixed, lovingly interpreted and reappropriated according to the circumstance with our personal artistic touch. We are happy to take a few stylistic detours and revisit a Rolling Stones rock hit or a Bob Marley reggae song. But we also incorporate in our repertoire lesser known artists that we appreciate such as Tingsek, Vulfpeck, Jarle Bernhoft, Jamie Lidell, Tom Misch, Allen Stone.

Group of covers, yes, but the creativity and interpretation that we infuse into each song is what makes Coffee Tone's soul. We adapt, arrange the songs, make medleys, mashups*, winks, as if sometimes a DJ was playing live with real instruments. It's our passion for music, our enthusiasm and our will to share these unique moments with the people who guide us and make the Coffee difference!

* mix of two songs in one

A network of gifted and professional musicians

In order to be able to play all these styles of music with brilliance, it is necessary to have a team of professional musicians with multiple talents. The orchestra therefore works with musicians of national and even international renown, with a rich and varied musical background, with of course many experiences in other projects of different stylistic horizons.

As the Coffee Tone family has grown over the years, each new musician in the group is chosen from the heart, both for his musical and human qualities.